I've got several 22 rifles and a few handguns as well. I'll have to get some pics of my older stuff, but I'll start with my newest additions, some Ruger 10/22's I built up from scratch. I'd owned (and sold off) a few 10/22's in the past, but only recently got into modifying them, which is half the fun!

Actually, the gun that got me started on modding these was one my son got that was already pretty well customized when we found it in a local pawn shop... Hogue Overmold stock, BX Trigger, 20" Green Mtn flute SS bull barrel, and a Hawke HD 3-9x40 IR scope, on a factory receiver... for $212! Bargain! I polished the bolt for him, and added an auto bolt release, extended mag release, LH safety, and a Kidd Viton charging handle.

After playing with his a little I decided I wanted to build one similar to it for myself. I found a cheap 1988 model at the same pawn shop that someone had put in some awful plastic Ram-Line folding stock. Rusty barrel, but the rest of the bones were good and the trigger group had already been professionally smithed. I sandblasted the receiver and alloy trigger housing, then put it in a laminate stock with an 18" Green Mtn fluted SS bull barrel, JWH scalloped bolt, auto release, Kidd charging handle & Timber Creek extended mag release, and mounted another Hawke scope (new 3-9x40 Vantage IR). I bought the stock raw and worked it over myself... sanded and pillared with a super-smooth glossy wipe-on poly finish.

Not long after that was done I got to longing for a "superstock" version as well. Bought a new stripped factory receiver and started from there. Added a BX Trigger with the usual auto release & extended mag release, 20" Green Mtn fluted blued sporter barrel, and a factory bolt that was reworked, polished, pinned, headspaced, and jeweled by Randy at CPC. Mounted in a Ruger Deluxe Sporter walnut stock I found a good deal on. This one got a Weaver Grand Slam 4-16x44 scope. The finishing touch was a custom walnut charging handle I made (with a little help).

Next 10/22 will probably be a little higher-end build on a TI receiver. But I've been putting together a couple of AR's recently, so that'll have to wait until more funds become available.

Joined Apr 10, 2016
·
4,590 Posts
I noticed the affinity for the stainless fluted bull barrels. They are sharp!
That's actually a rabbit hole I've been looking at hopping into. Well, after I finish the AR pistol build, and my first attempt at a trigger job and beaver tail on a Springfield GI 1911.

poppajon75 said:
I noticed the affinity for the stainless fluted bull barrels. They are sharp!
That's actually a rabbit hole I've been looking at hopping into. Well, after I finish the AR pistol build, and my first attempt at a trigger job and beaver tail on a Springfield GI 1911.
Click to expand...

I build several high-end 1911's every year for people and dozen of precision AR's. If you need any advice on hand fitting parts, feel free to give me a shout.

Sent from my GM1915 using Tapatalk

msmith1986 said:
I build several high-end 1911's every year for people and dozen of precision AR's. If you need any advice on hand fitting parts, feel free to give me a shout.

Sent from my GM1915 using Tapatalk
Click to expand...

Thank you, much appreciated.

I've got a 10/22 without mods (so far), a little single-shot KSA Crickett that my younger daughter's learning to shoot with, a Heritage 9-shot .22 single action, and a Colt Official Police in .22 (the same type of revolver that Barney Fife carried).

Joined Oct 15, 2015
·
4,139 Posts
I love 10/22's. Here's a couple I put together. A regular one and a hopped up one. The hopped up one is extremely accurate without the muzzle brake on it. (hell the regular one is accurate too). The barrel is an unmarked .920 heavy barrel I got for cheap, but I couldn't find a muzzle brake that fit perfectly and it shoots better without the brake. I wasted money on 2 different compensators that I had to machine deeper counterbores into... well they made the gun inaccurate. I'm sure you need a perfect transition from the rifling crown to the ID of the brake for the sake of accuracy. That's what happens when I try to "save money"... I'm gonna end up putting a spiral fluted stainless KIDD on it. I'm kinda mad at this gun for costing so much... so I'm just gonna spend more on it. LOL
I have over $800 into it which is ridiculous because I've seen complete custom build better than this for $600 at shows. Oh well.
I've got more 22's but I'll drag them out another time. A couple of tube-fed Marlins, and a few pistols.
Here's my 10 year old daughter's rifle.

Stock action that my gunsmith worked over. Magpul Hunter stock, military lit reticle 3x9, red dot, and a surprisingly bright flaslight/laser combo on the fore stock. The red dot is coming off and going to live on the AK I'm thinking.....

Joined Aug 2, 2018
·
922 Posts
My favorite 22 rifle is a 1939 Remington M241. The original "Speedmaster". A John Browning design that will reliably feed and shoot any 22LR ammo even sub-sonics. Cheap ammo, expensive ammo, bulk ammo it doesn't matter. Plus it easily breaks down into 2 pcs. like a camp gun for transport. I've got several 22 auto's and bolt actions but this is the one that almost always gets pulled out and shot on rimfire days at the range. Browning still makes a version of this gun that is really nice but I have a "thing" for vintage firearms. Maybe 'cause I'm vintage too.

Joined Jul 19, 2019
·
2,061 Posts
I have thought about getting a Walther P22 myself. Cheap to shoot, and you can maintain your sidearm skills at the range.

Joined Oct 15, 2015
·
4,139 Posts
I had a P22 and it never ran right even after I polished up the internals and put a new recoil spring in it. I should have sent it in for warranty but ended up selling it. 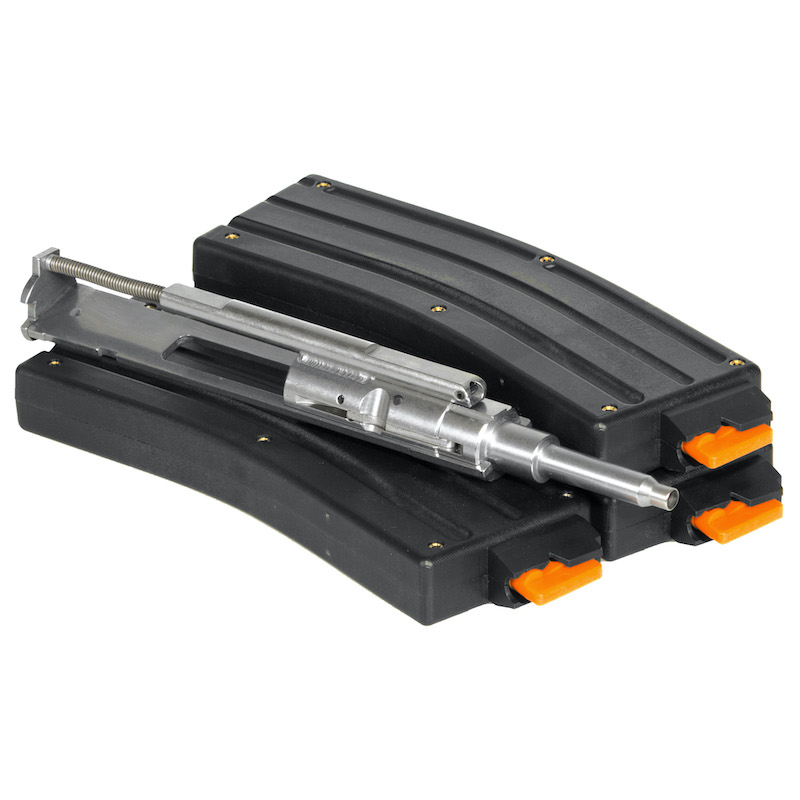 The CMMG .22 LR AR-15 Conversion Kit offers instant drop-in adaptability from .223/5.56 to .22 Long Rifle. Perfect for training new shooters or to save money at the range plinking with inexpensive .22 LR.

The CMMG .22 LR AR-15 Conversion Kit offers instant drop-in adaptability from .223/5.56 to .22 Long Rifle. Perfect for training new shooters or to save money at the range plinking with inexpensive .22 LR.

I just ordered. I wasn't aware of a price decrease, bonus for me.

I lucked into a mint on recently for $125 on a local shooting page.

THE MAN WHO LOVES TWANG!