Join Date: Oct 2015
Location: Suburbs
Posts: 4,015
Professional Wrestling
I've always loved pro wrestling. It just makes me happy. Makes me feel like a kid again. I haven't followed it closely for many years but I still watch it on TV about once month. I even go to small circuit events locally once in while. I realize a lot of people hate it (they say it's fake). Well... every movie is "fake" too, but nobody seems to mind that.
Anyhow,...if you like it, let's hear
who, what, why, where and how. I'd love to hear the memories you have. It's a culturally significant piece of Americana that just takes me away from life's troubles.
My favorite wrestling legend is Mick Foley. Always loved Steve Austin, I also get excited just thinking of the loud deep (((((TONGGGGG)))) when Undertaker came out. 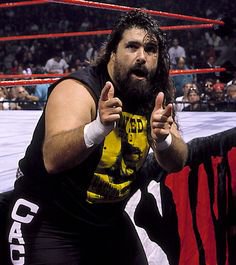 Join Date: Apr 2017
Location: Northern California
Posts: 5,154
As a kid in England we had Professional Wrestling, was on TV every Saturday afternoon and live at our local town hall every month.
My father got involved in it and used to take me to his Practice sessions, oops i mean training sessions, his stage name was Mike O'Shea, and billed as the fastest man in Irelandeven though at the time he had never been there.
His manager and fellow wrestler was a man called Jim Stockdale, Jim wore a mask and went under the name The Blue Angel, i was always warned when we went to the matches not to say "Hi Jim to The Blue Angel as no one knew who he was lol, Good times
Gumby-cr, cory1984, WABOOM and 4 others like this.
I gently bent one each into my nostrils, then put the remaining one in my mouf. --droy1958
Fusion is online now
Quote Quick Reply
post #3 of 14 Old 08-21-2019, 09:25 AM
blackrabbit
Hobo Aristocrat

Join Date: Jan 2017
Location: Manitou Springs
Posts: 1,504
I do have a memory as a kid of going to a pro wrestling event and touching the Junk Yard Dog's shoulder after he won a bout and left the ring. These days I enjoy the gladiatorial MMA events in the octagon.
Gumby-cr, TonyBrooklyn, cory1984 and 1 others like this.
blackrabbit is offline
Quote Quick Reply
post #4 of 14 Old 08-21-2019, 11:38 AM
Gumby-cr
The Great Green One

Join Date: Aug 2008
Location: OHIO
Posts: 2,107
Was a huge WWF fan in the 80's than lost interest. Started watching WWF and WCW again around the mid to late 90's and lost interest again heh. Then I guess WWF became WWE which I started rewatching in 2015 and I've only been able to maintain interest for a few months at a time. Been watching Lucha Underground on TubiTV which has 4 seasons available for free. The first two seasons were worth watching then the show took a nosedive. My favorite wrestlers are Pentagon Jr., Raven and Kidman from WCW, and Bret the Hitman Heart from both WWF/WCW. My fathers favorite wrestlers were George the Animal Steel and Rowdy Roddy Piper which I enjoyed too.
TonyBrooklyn, cory1984 and Rondo like this.
Gumby-cr is offline
Quote Quick Reply
post #5 of 14 Old 08-21-2019, 11:41 AM
Gumby-cr
The Great Green One

Join Date: Oct 2015
Location: Suburbs
Posts: 4,015
I've been watching lots of old videos on YouTube of classic matches. Also been watching the old ECW and the Japanese "Death Matches". Terry Funk and The Headhunter twins and other washed up wrestling legends beating the hell out of themselves. It's pretty crazy.
Gumby-cr and cory1984 like this.
WABOOM is online now
Quote Quick Reply
post #7 of 14 Old 08-21-2019, 12:18 PM
Peapaw
No longer a community member.

Join Date: Aug 2018
Location: Central North Carolina
Posts: 828
1975 ish at a ring set-up in the infield of the local Baseball Stadium. Wahoo McDaniel and Black Jack Mulligan were on the card and Ole and Gene Anderson were heels, but the Reigning Champion Tag-Team. They fought the main event and won- me and everybody else had a good time booing them. Great day in the life of a 5th grader. Didn't follow it much longer, but that was a great day with my Dad.
Gumby-cr, TonyBrooklyn and WABOOM like this.
S&W is offline
Quote Quick Reply
post #9 of 14 Old 08-21-2019, 01:00 PM
cory1984
Puffer Fish with some spikes


The pro wrestling industry lost one of the all-time greats this week, when Harley Race died Thursday of lung cancer at the age of 76.


During his 31-year in-ring career (1960-1991), he was an eight-time National Wrestling Alliance world heavyweight champion, a one-time World


Then Race moved to the WWE in 1986, winning the King of the Ring tournament and referred to himself as King Harley Race, managed by the legendary Bobby The Brain Heenan.


Race had a match against Junkyard Dog at WrestleMania III at the Pontiac Silverdome.
Race moved to World Championship Wrestling in 1990 and ended his in-ring career late that year and transitioned to a managerial role.


In 1999, Race started an independent promotion, World League Wrestling, and ran shows in Missouri for the past 10 years.


Race is one of six men to have been inducted into the WWE Hall of Fame, NWA Hall of Fame, Professional Wrestling Hall of Fame and the Wrestling Observer Newsletter Hall of Fame.
TonyBrooklyn and WABOOM like this.
"Tobacco is my favorite vegetable." - Frank Zappa
cory1984 is offline
Quote Quick Reply
post #10 of 14 Old 08-21-2019, 01:07 PM
Kidvegas
Elder Puffer Fish Leader

Sent from The Cauldron Of Insanity
Gumby-cr, TonyBrooklyn, cory1984 and 1 others like this.
ANYTIME IS STOGIE TIME!
Kidvegas is offline
Quote Quick Reply